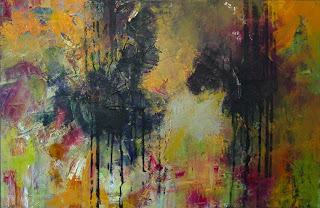 I am now in the process of getting the garden and the house ready for winter.
Then I will kick into gear for my show in Portland in April. I do have a piece
on the wall waiting for attention right now. I think it is 24 x 36.

I just finished my first interview. Richard Speer the art critic in Portland tried
but I was closed mouth with him. He called me enigmatic. I consider Richard a
friend so I would probably give him one now. This one was written, which made
it much easier. Anyhow you can see it on Mary Ann Wakeley's new site,
www.artofthisworld.net. The link for the interview is
http://www.artofthisworld.net/katherine-treffinger.html
Posted by Katherine at 8:45 AM

Enigmatic sounds like a compliment to me. Artists tend to have a sense of mystery about them. Your interview with MA was excellent. It is good to get to know a little more about you.

Thank you Zappha. I think he compared me to Warhol or somethin".
Thank you for taking the time to read the interview, you are the best.

Yes, well, "Richard" enjoyed talking to you that first time, ellusive and borderline cagey though you were.
;-}
I suppose I was on some level glad not to have you explain that obelisk-like recurring figure; as I recall, it prompted me to write about yonis and lingams for the first time I had used such terms in a review. A bit obvious, I suppose, but in the (welcome) absence of pat answers, what's a writer to do?
Where and when are your show in Portland? Let me know by email or FB... Exciting to hear..
signed,
the indubitable "Richard Speer"

Richard indubitable would be the word! So nice to see you in blog land and so glad that my 'cagey-ness'
could give the writer in you free reign to break into new territory!