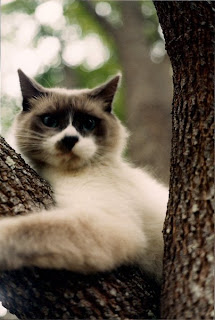 1994-2009 My beautiful Freddy, a Himilayan, (not to be
mistaken as any ordinary cat, for Himilayans are very
different) passed into the realm of spirit today and will
be sorely missed.

Freddy was 16 and led a very good life. He caught
rabbits, chipmunks and snakes on the side of Mt.
Tamalpais in California. He ruled the neighborhood in
Portland, Oregon where he hung out across the street
under an abandoned house at the local cat speakeasy
playing cards and drinking bootleg fish whiskey. He
moved to a Motel in La Grande, escaped and spent
a night in the wilds of the town of La Grande, where
something happened (his owners will never know what)
and he decided to retire to indoor life where he was quite
content until two very stupid dogs moved in. After
some adjustment he learned to cope. He is survived
by two humans, Kirby and Katherine, 3 cats, Scooter,
Buddy and Matisse and well, of course, the two stupid
dogs Maggie and Sadie.
Posted by Katherine at 6:15 PM

Oh my Fredd was so handsome. I Love the picture of him. I love my sweet kitty and my heart would be so broken if I was to lose her.

Michelle wasn't he though! He did break my heart by dying, but it was clearly time.

Jeane that is funny that you notice that. We always called him the raccoon because of the way he moved and acted. We also called him a monkey. He is the only cat I have had that liked to be held like a child and he would put his arms around my neck. He was also bow legged. What a guy!

What a beautiful write up Katherine, about your beloved cat. I got to know him a bit from reading this. They have such unique personalities, don’t they? A well lived life….a cat can’t ask for more!

Oh Katherine, I'm so sorry for your loss. Beautiful memories to cherish.

I agree Leslie and I find it true for myself A well lived life…a cat (person) can’t ask for more! Writing this was extremely helpful, it finally allowed me to cry at the same time I laughed.

laughter and tears seem like a fabulous offering to the memory of freddy and healing for you! i'm sure the beautiful memories with last another lifetime!! peace.

Katherine, such a beautiful shot of Freddie, I remember him in your little beach house with all the sand on the floor, I thought you were so lucky to have him. xoxo~R

Thank you Lucy for visiting and lending your heart.

Ahhhh Boppy's beach house. What a sweet little place with my sweet little kitty and dog. God, living a 1/2 block from the ocean. Freddy just couldn't be contained, he wanted to be out in all that energy. I was lucky to have him. What a cat. Thank you Rachel

So sorry about Freddie, Katherine. He really was a beautiful cat.

Thank you Robyn. Yes, and an ornery one.

I am sorry about Freddie.. I know you must miss him.
Katelen

Thank you Katelen. I do.